The following article was contributed by Jim Hughes and first appeared in his excellent blog, found here: http://codex99.com/archive.html 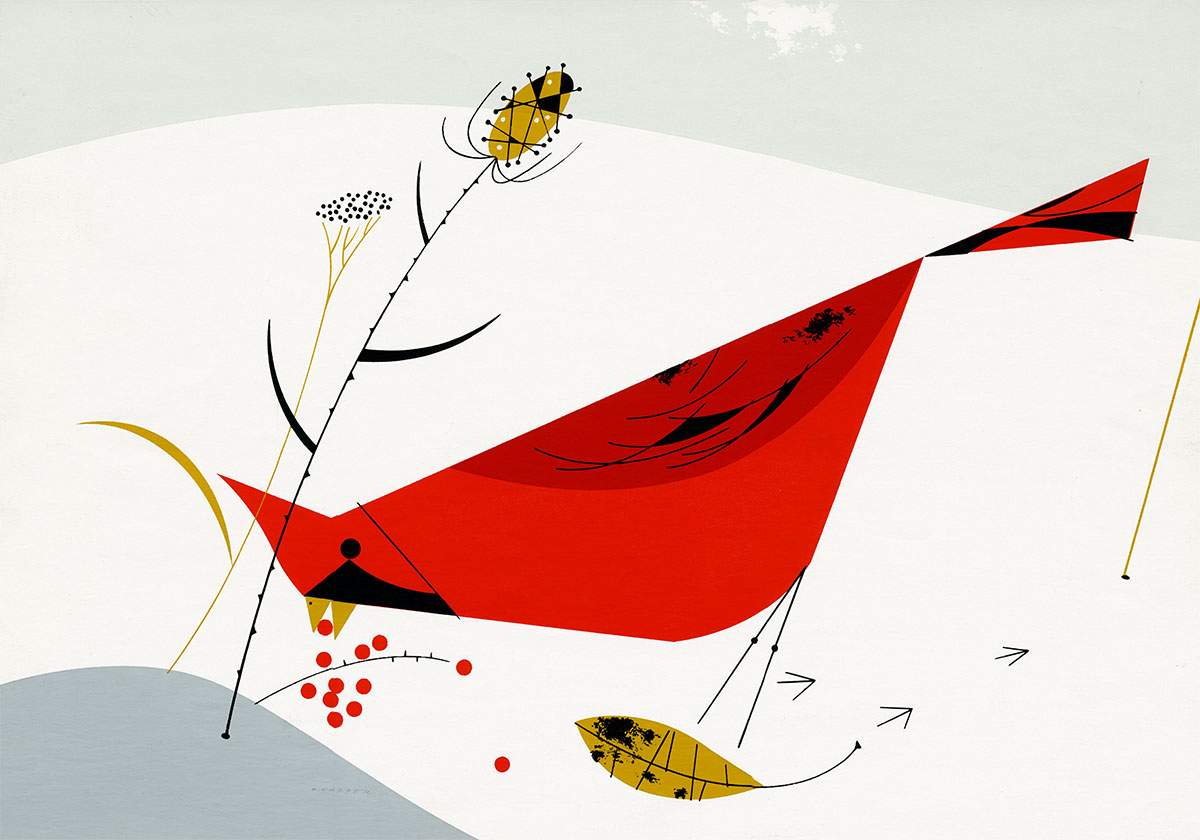 Charley Harper as Illustrator: the 1950s, part I

Charles Harper was born in Frenchton, West Virginia on 4 Aug 1922 and grew up on the family farm. Rather early on he decided to become an artist and eventually ended up at the Cincinnati Art Academy.1 After a three year stint in Army Intelligence during WWII he returned to his studies, enrolling at the Art Students League. New York City didn’t agree with the country boy and he was soon back at the Art Academy, where he graduated in 1947 and was awarded the Stephen H. Wilder Traveling Scholarship.

Charley and his new bride, Edie, used the scholarship to travel the West and South for six months. It was this trip that solidified his interest in painting nature and one that inspired him throughout his career. Returning to Cincinnati, he accepted a teaching position at the Art Academy as well as a job with the commercial studio C.H. Shaten.2,3

Commercial ad work proved difficult for Harper. He was frustrated drawing the “happy housewife” and, at the same time, he began to tire of realism altogether, stating that it “revealed nothing new about the subject, never challenged viewers to expand their awareness, (and) denied me the freedom of editorializing.”

He began to experiment with a new style where perspective was replaced with hard-edged two-dimensional shapes reduced to only straight lines and curves and where shading and depth was replaced by overlapping color. The idea was “..to push simplification as far as possible without losing identification.” He would eventually call it minimal realism.

Harpers’ new style first appeared in the December 1948 issue of the Ford Times – in the recipe section. Arthur Lougee, the Ford Times art director, was sufficiently impressed and over the next several years Harper was given a number of commissions for feature articles and cover illustrations. 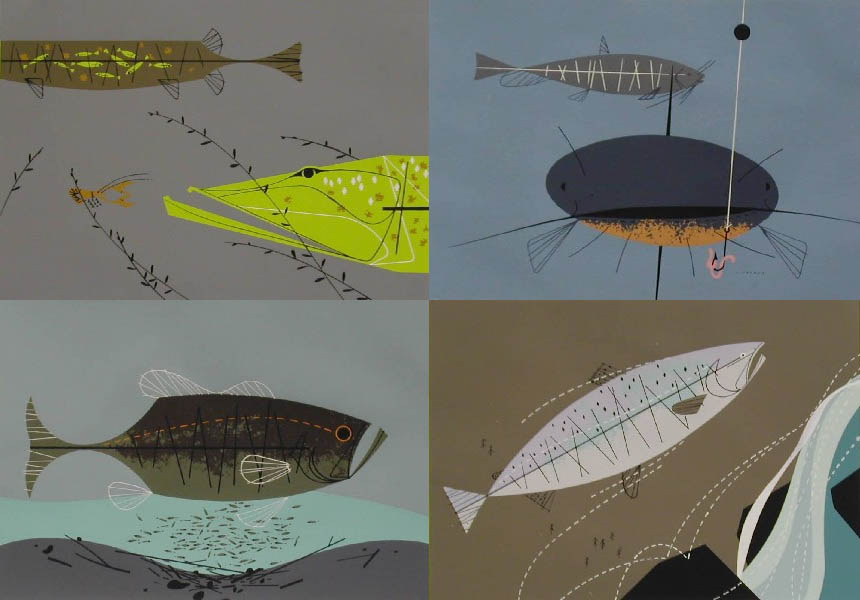 In the March 1952 issue Charley illustrated his first major wildlife article, “Eight Familiar Fish.” The article was accompanied by an offer for a series of “hand-screened” prints (available for five USD each). It was apparently Lougee who suggested offering the screen prints through the magazine after numerous reader requests. The silkscreen prints (or serigraphs, if you want to be fancy) were entirely hand produced by the Harpers in their basement, with Charley cutting the stencils and Edie mixing the inks. 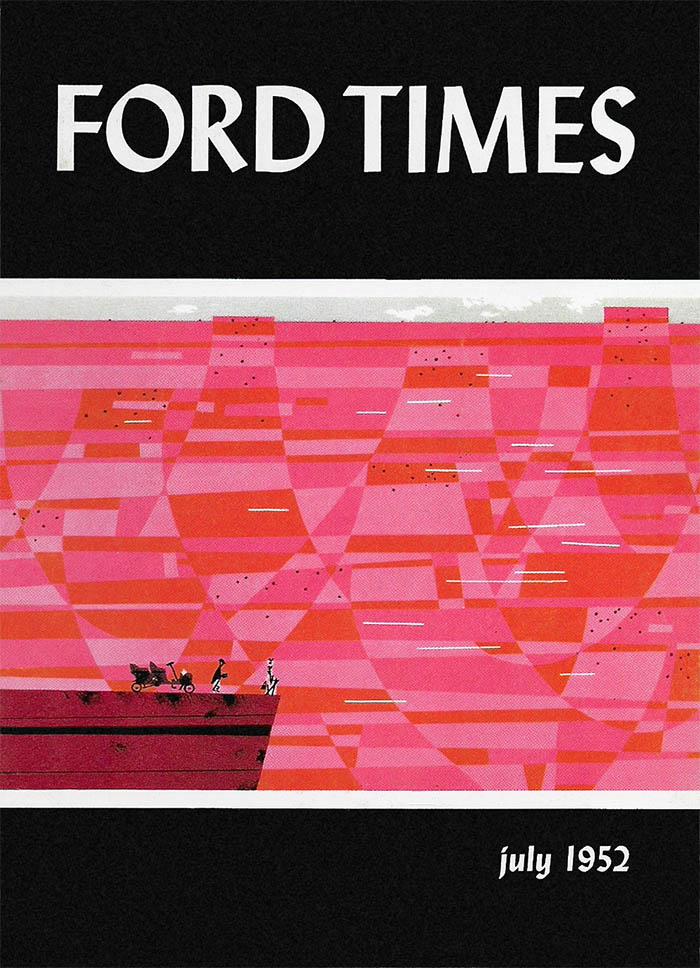 A second series of prints, depicting national landmarks, was offered in June 1953 at the conclusion of a series of articles titled “Horseless Carriage Adventures.” 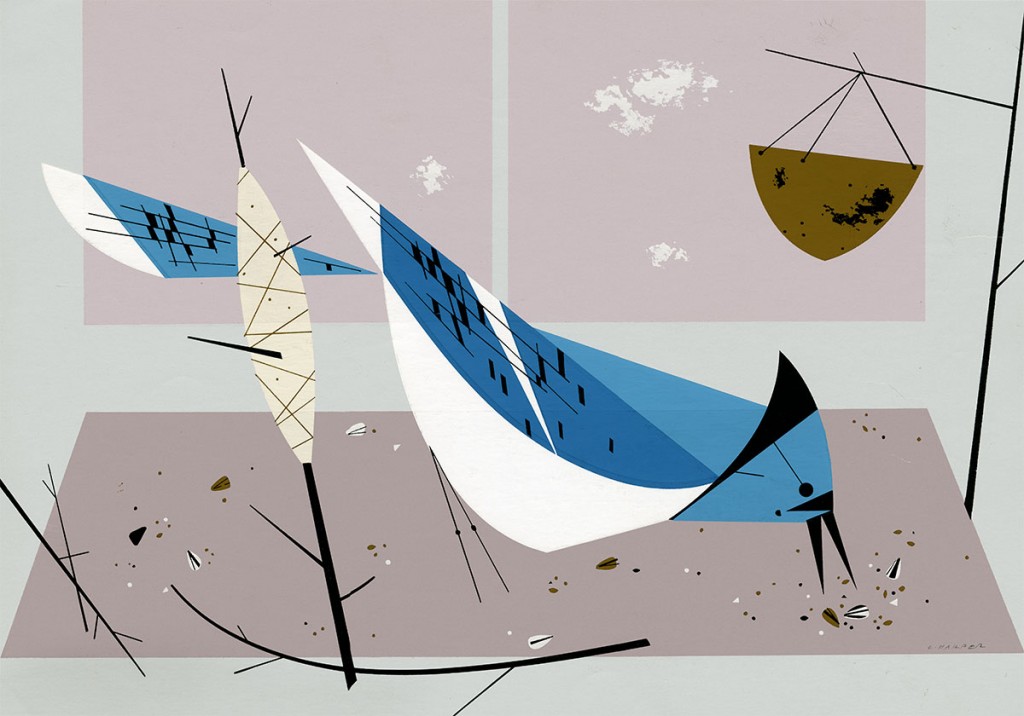 And then came the birds. In 1954 Lougee gave Charley the assignment of illustrating the November 1954 E.B. White article “Feeding Station Birds.” In what would become something of an annual tradition, Charley would write, illustrate, and offer prints for a major bird article in the November issue.4 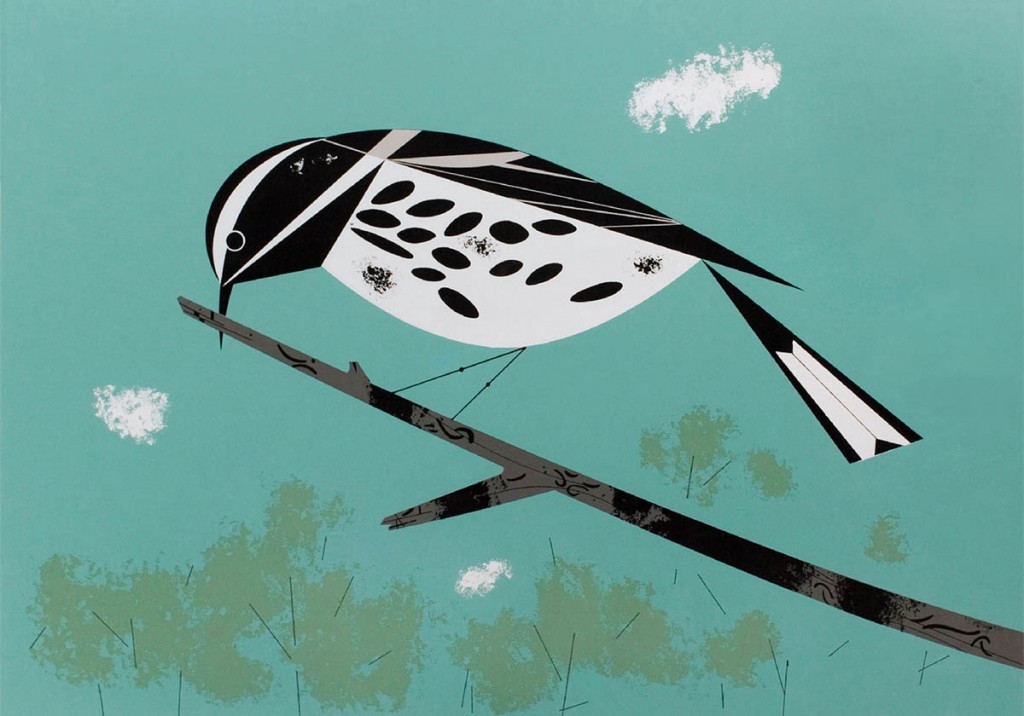 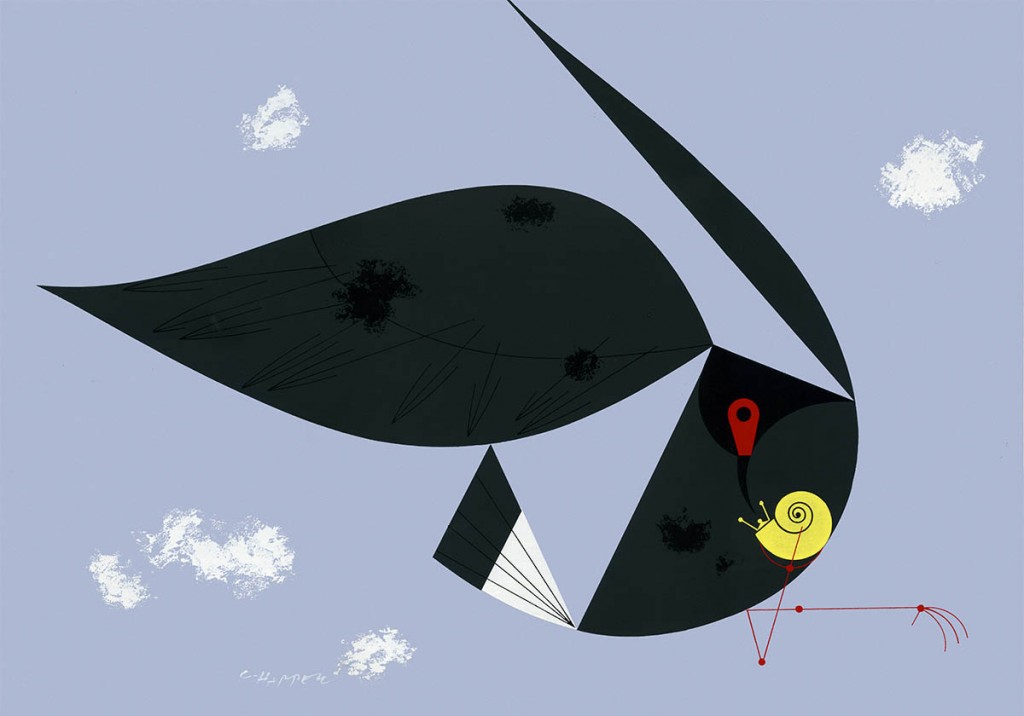 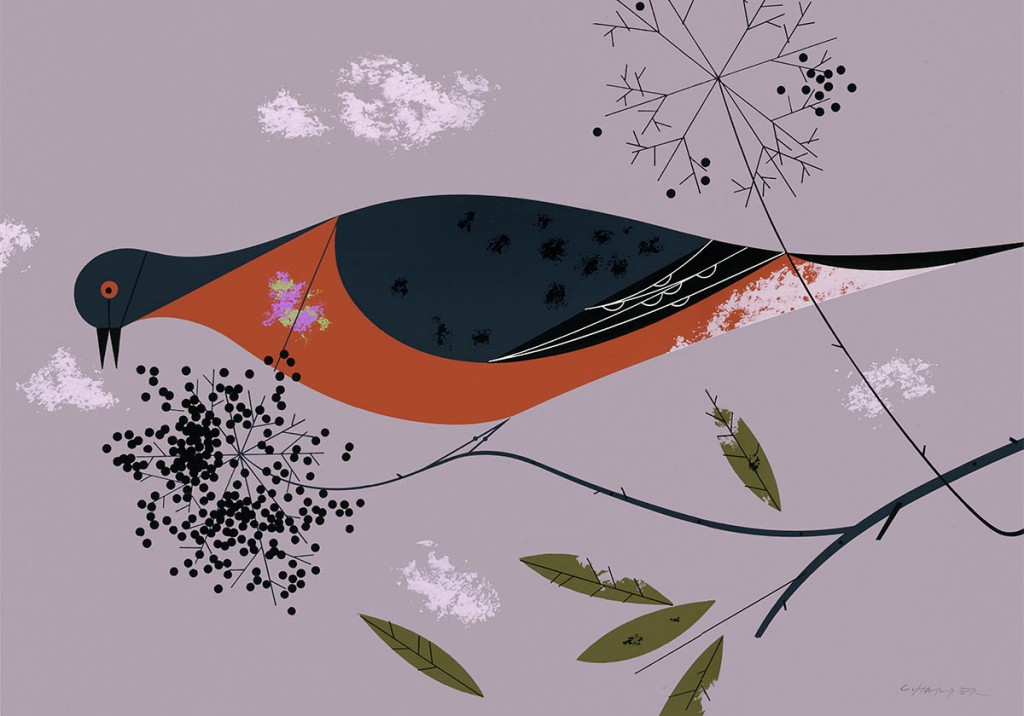 Lougee, whom Charley credits as being as close to a mentor as he ever had, gave Charley an extremely wide range of assignments, perhaps wider than any other Ford Times artist. Aside from his wildlife pieces, he illustrated nearly every subject imaginable for a travel-focused magazine. Between 1948–1982 he contributed to more than 90 articles and illustrated more than 30 covers.5 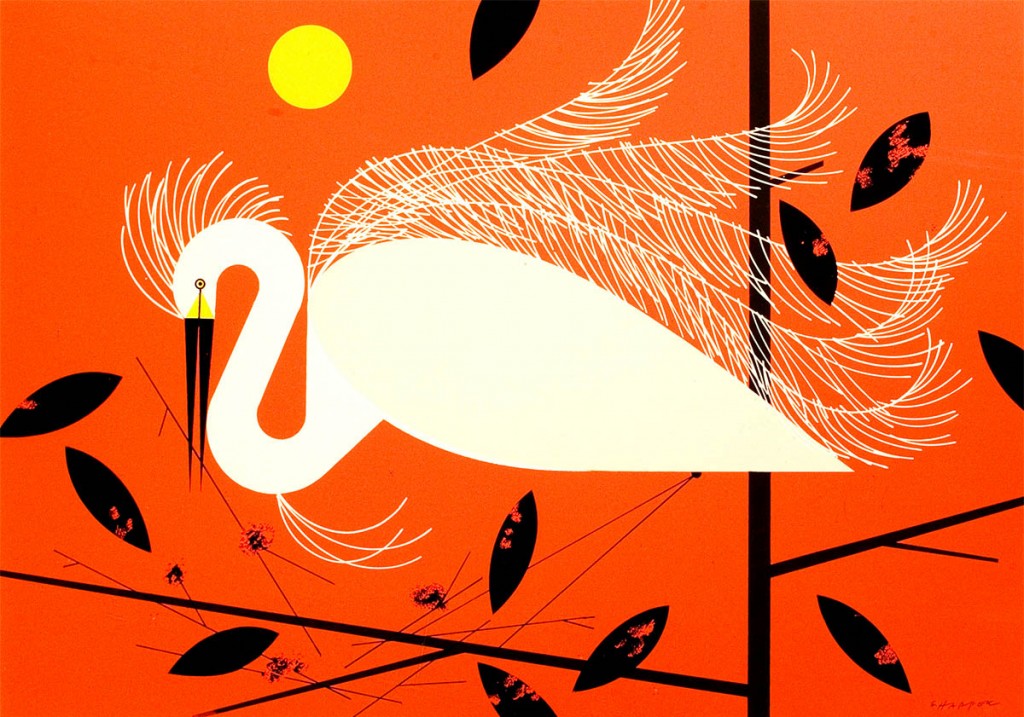 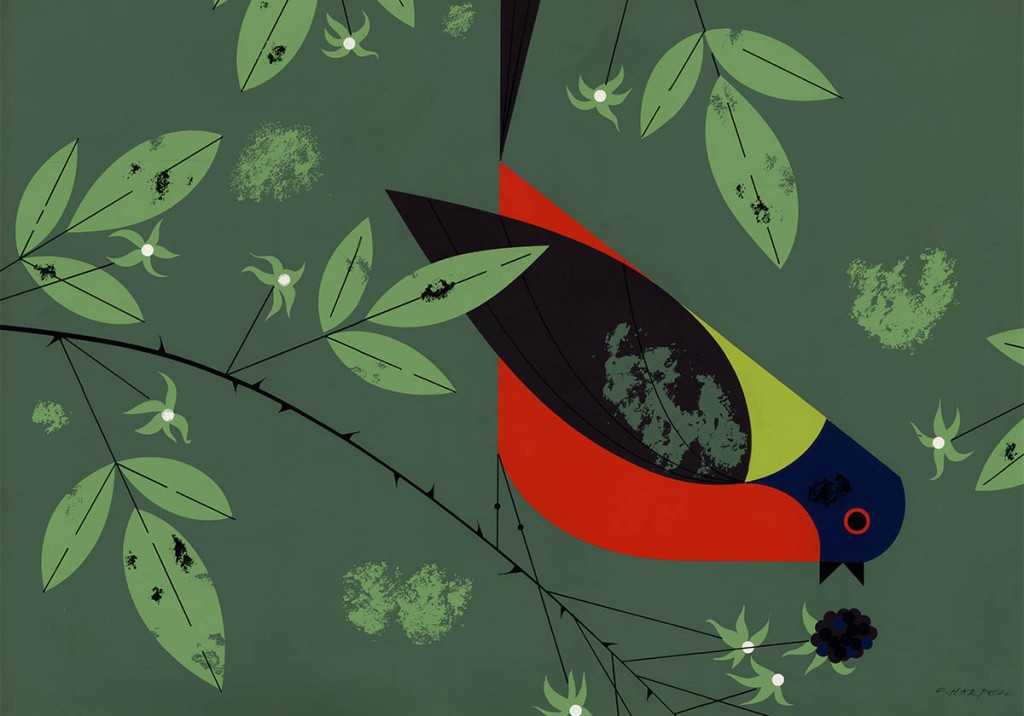 The original Ford Times illustrations were gauche on art board (or gauche on paper cut to shape and glued to the background – call it mixed media) and the silkscreens were ink on paper. Attempts to reproduce them in magazines, books, or on the internet really don’t do the originals justice. For the first-time viewer the actual silkscreens come as something of a revalation. 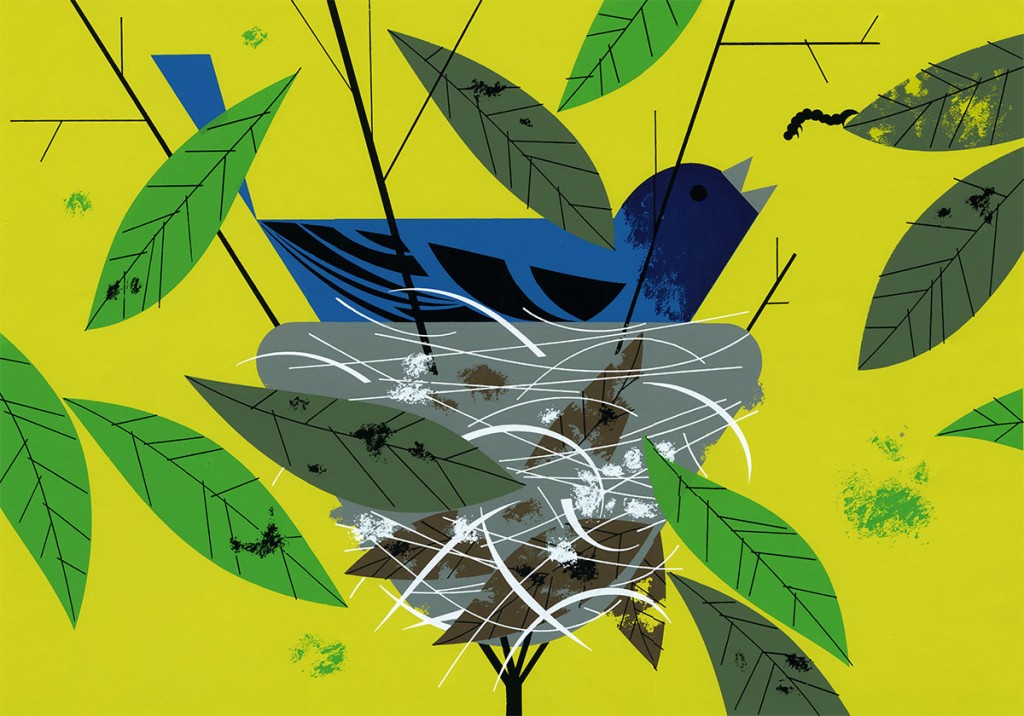 1. Charley claimed that he picked the Art Academy based solely on the picture of the female upperclassmen on the cover of the brochure. After he arrived he found that the women upperclassmen “paid no attention to him.” He, however, did meet another incoming freshmen, Edith McKee. Charlie and Edie would be eventually married for more than 60 years.

3. True Fact: For the last 15 years I have lived literally within walking distance of their studio, but it wasn’t until recently that I visited (to pick up a print, Painting Bunting, see above). You would imagine, based on their art, that Charley and Edie lived in a modern house surrounded by nature, and they did; but the house is also smack dab in the middle of the suburbs. The house and studio (we’ll call it a compound) are set back from a residential street by a very long and very narrow drive leading into the woods. The studio, which is essentially kept in state (his last unfinished painting is still on the desk) is, I am proud to say, marginally messier than my home office. Out of chaos comes order and beauty, or something like that. This wonderful photo, courtesy of Harmen Liemburg from his Sep 2006 visit, pretty well sums it up: 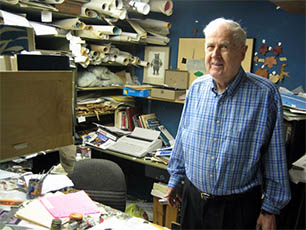 The house, separated from the studio by a courtyard, was designed by Rudy Hermes for the Harpers in 1957 and is set on a hill, so a single story in front gives way to two story wall of glass rather dramatically overlooking the woods in the back. Aside from some vintage Eames and Nelson furniture, and a lot of original artwork, the house and studio are filled with books. I know that I saw many of Charleys’ titles in the office, a Sibleys in the studio and a Miro book in the house, but time constraints prevented me from compiling a more comprehensive list. Sorry.

Rena, the assistant studio manager, and Sandy, responsible for the property, could not have been more gracious on my visit. I highly recommend that given the opportunity, you pick up your Harper art directly from the studio.