This is another in our series of articles about Charley Harper’s six decade long artistic career.    In this timely article we explore the Christmas Cards illustrated by Charley in the 1950’s.

In Charley’s early career, he was a commercial artist, most notably in conjunction with the Ford Motor Company’s “Ford Times” periodical magazine.   However, during the early 1950’s Charley also illustrated a number of Christmas cards in association with Associated American Artists and Hallmark Cards.

Associated American Artists was begun by Reeves Lewenthal. Lewenthal’s first job was as a reporter for the Chicago Tribune but he quickly expanded into artists’ agent.    Prints being relatively cheap to produce, Lewenthal decided to focus on that medium. Before the 1930s, fine-art prints were usually limited editions which sold for $10–$50. During the Great Depression the Federal Art Project had resulted in hundreds of thousands of prints, but these were distributed free (mostly to schools) thus the artists made nothing. Lewenthal’s idea was to combine quality, affordability, and profit. In 1934 he met with several well-known American artists, including Thomas Hart Benton, and proposed hiring them to produce lithographs which he would then sell to middle-class buyers for $5 apiece plus $2 per frame, paying the artist $200 per edition. At the same time, corporations began hiring famous artists to work on advertising campaigns. This convergence of art, business, and consumerism was the perfect environment for Lewenthal’s new Associated American Artists enterprise.   Lewenthal marketed his prints as educational resources, as a patriotic choice, and as “art for the people” rather than “art for the wealthy.” In 1944, AAA had 107 artists under contract and sold 62,374 lithographs.  In addition to its mainstream marketing strategy, AAA chose art and artists with populist appeal. Representational and regional art made up the bulk of their lines.[1] 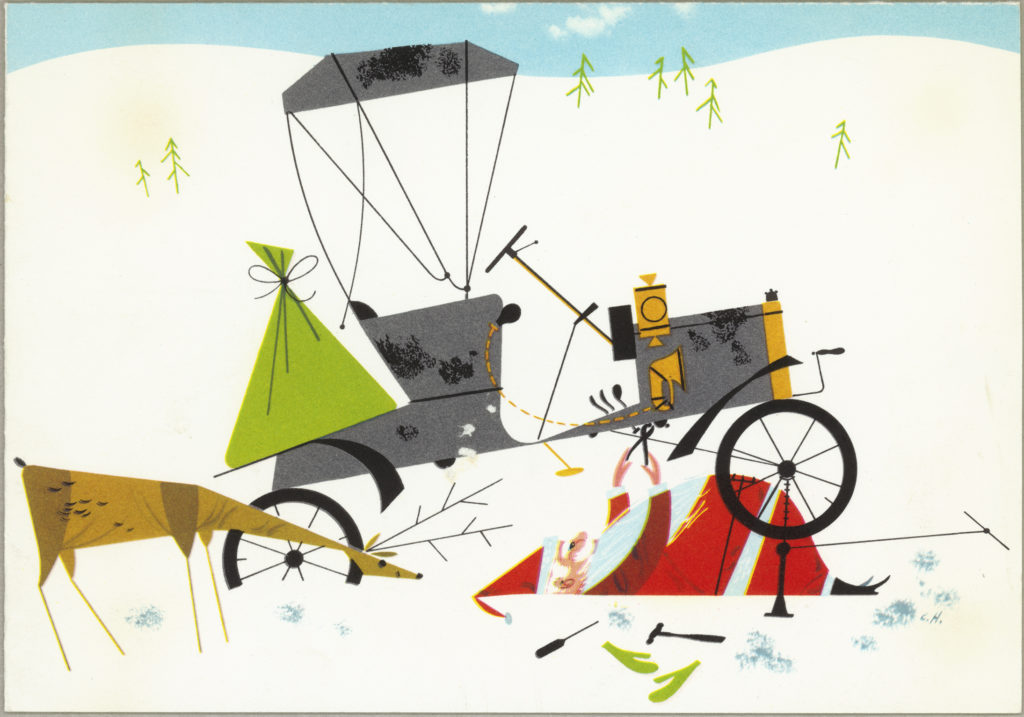 Hallmark Cards is a privately owned American company based in Kansas City, Missouri. Founded in 1910 by Joyce C. Hall, Hallmark is the largest manufacturer of greeting cards in the United States.  Joyce Clyde Hall became captivated by a salesman who stopped by his family’s store in 1906 in Norfolk, Nebraska. Driven by the postcard craze of 1903, Hall decided to venture from retail of various products to wholesale of postcards. He moved his business to a larger market of Kansas City. As time went on, Hall became more convinced that greeting cards would become more prominent than postcards. Greeting cards, according to J.C. Hall, represented class, promised discretion and “they were more than a form of communication—they were a social custom.” By 1915, the company was known as Hall Brothers and sold Valentine’s Day and Christmas cards. In 1922, the company expanded throughout the country. The staff grew from 4 to 120 people, and the line increased from holiday cards to include everyday greeting cards.  In 1928, the company adopted the name “Hallmark”, after the hallmark symbol used by goldsmiths in London in the 14th century, and began printing the name on the back of every card. In the same year, the company became the first in the greeting card industry to advertise their product nationally.   In 1944, it adopted its current slogan, “When you care enough to send the very best.”[2]

“Down the Chimney”  (Courtesy of the Hallmark Archives,  Hallmark Cards, Inc.)

“A contract with Associated American Artists, Inc. allowed Hallmark Cards reproduction rights to paintings and designs of more than 300 contemporary American artists, including Charles Harper.   J.C. Hall, founder of Hallmark Cards, signed an agreement with Reeves Lewenthal, president of the art group, under which the work of member artists would be made available to Hallmark for use on greeting cards and related product in the 1950s.”[3]

In an article in the Kansas City Star[4], Hallmark’s founder, J.C. Hall stated “Our affiliation with Associated American Artists is a further step in a continuing effort to bring the work of the nation’s finest living artists to a mass audience through the medium of greeting cards. It is equivalent to adding the creative efforts of more than 300 of the most imaginative and inventive minds in the country to our art staff.”

Several of Charles Harper’s original paintings were printed on Hallmark Christmas greeting cards, including “Unscheduled Stop,” “Down the Chimney” and “Santa’s Dilemma.” Over 125,000 Hallmark greeting cards featuring Harper’s artwork were sold from 1954 – 1955.[5]

In each of these examples we see the early makings of the style Charley called ‘minimal realism’, in which the essence of a subject (not the detail) is portrayed.  Charley is said to have commented that he was the artist least likely to be compared to Audubon.  What he meant is that J. J. Audubon was the consummate realist, striving to portray the minutest details of his subject, and his own style was at the other end of the ‘realism scale’.   Charley’s iconic images leave it to the observer to fill in the fine detail.  His later work is more refined, more geometric, and sophisticated.   But his early Christmas cards have the ‘Hallmark’ of his inimitable style.